Sannat or more precisely Ta’ Sannat, lies to the south of the island of Gozo.
The name is probably derived from that of an Arabic-Greek family that moved to
Gozo from Sicily. 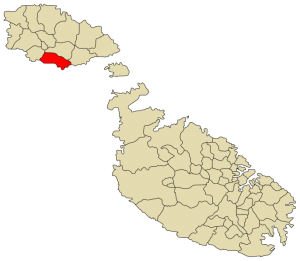 At Ta’ Cenc, within the limits of ta’ Sannat, there is L-Imramma Temple,
a primitive type prehistoric temple made up of a sort of an oval court with a
series of more or less oval rooms to the north. Other interesting remains are
three dolmens, a horizontal, roughly shaped, slab of limestone supported on
three sides by blocks of stone standing on end. Ta’ Cenc is also famous for its
spectacular precipices or cliffs, that are the natural home of several wildlife
species, both flora and fauna. Lying low by Ta’ Cenc, one could admire the
natural beauty of Hanzira valley, a natural gorge separating Sannat from the
village of Xewkija. The valley, due to its steep rocky sides, has little signs
of human interference and leads down to Mgarr ix-Xini Bay to the South of Gozo.
The pebbly beach of this bay is not as popular with swimmers as it is with
divers. In fact Mgarr ix-Xini is one of Gozo’s best places for diving and the
wreck of the once Malta-Gozo ferryboat Xlendi rests on the seabed, a few hundred
metres away from the bay’s outer stretches.

Sannat was one of the first places in Gozo to become a separate parish. Bishop
Davide Cocco-Palmieri established the parish of Sannat on 28 April 1688. The
present church dedicated to St. Margaret Martyr was initiated on the site of a
smaller one in 1718 and was consecrated on 16 October 1755. However, after the
significant structural changes, it was consecrated again on 22 November 1868. It
was raised to the Archipresbyteral status on 27 December 1893. The church has a
very good altarpiece by Stefano Erardi, a famed local painter. The village feast
of St. Margaret is celebrated each year around the third week of July.

Skip back to main navigation