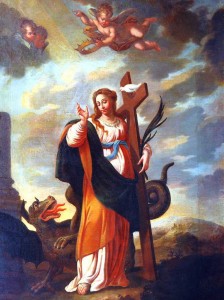 St Margaret was the daughter of a pagan priest at Antioch in Pisidia. Also known
as Marina, she was converted to Christianity, whereupon she was driven from home
by her father. She became a shepherdess and when she spurned the advances of Olybrius,
the prefect, who was infatuated with her beauty, he charged her with being a Christian.
He had her tortured and then imprisoned, and while she was in prison she had an
encounter with the devil in the form of a dragon. She is patroness of childbirth.
The next day, attempts were made to execute her by fire and then by drowning, but she was miraculously saved and converted thousands of spectators witnessing her ordeal-all of whom were promptly executed. Finally, she was beheaded. She is one of the Fourteen Holy Helpers, and hers was one of the voices heard by Joan of Arc. Her feast day is July 20th.

Skip back to main navigation